The jury always includes the last winner of the architecture prize. This time, it was the French architect Lina Ghotmeh, who had been awarded the Schelling Architecture Prize the week before. The jury also included KIT graduate Daniel Uhrig, journalist Kaye Geipel, Prof. Dr. Kathrin Golda-Pongratz (Frankfurt University of Applied Sciences), and Prof. Dr. Tobias Wallisser (Stuttgart Academy of Fine Arts).
Prof. Ludwig Wappner hosted the evening. The laudations were read by Dr. Ursula Baus (Schelling Architecture Foundation) and Prof. Dr. Ludger Hünnekens (Cultural Officer of the City of Darmstadt). The certificates were presented by Jutta Dambach-Stierle from the board of the Schelling Foundation.

The main prize of 2,000 euros was awarded to graduate Clara Süssmann.
Her master's thesis "On a treasure hunt in the Black Forest - Mineral Reservoir Grube Clara" for a mineral reservoir in the Black Forest draws its content charge from a well-founded, further thought-out and newly connoted concept of a reservoir. Through its structural location and implementation in the form of a participatory, process-oriented, museum-like and public building, the mineral store becomes a treasure trove and identity bearer for the region.
The architectural expression of the skilfully and precisely elaborated design shows in its different architectural facets that the intended synthesis of a contemporary and sustainable culture of storage and preservation could make a valuable contribution to a rekindled building culture in the Black Forest.
The work was supervised by Prof. Ludwig Wappner and Prof. Dr. Riklef Rambow.

In addition, two recognitions were awarded. One went to Fanny Hirt for her draft "Kaufhaustransformation - Neudefinition der Heidelberger Innenstadt" (Prof. Dirk E. Hebel and Prof. Dr. Riklef Rambow). Ms. Hirt's master's thesis deals with the dissolution of the monostructure of department stores and their resocialization in the inner city using the example of the transformation of a large Heidelberg department store. In particular, the thesis contrasts the aspects of ecological, economic and social sustainability and thus creates a basis for adaptability, crisis-proofing and the long-term nature of architectural transformation projects.

Another award went to Hanna Wollny for her work "Building as a Material Resource - The Example of a Temporary Lecture Hall Building" (Prof. Dirk E. Hebel and Prof. Andreas Wagner). Using a temporary lecture hall building for the University of Constance as an example, Hanna Wollny shows how recyclable construction methods allow the pure deconstruction of building components to form an inexhaustible cycle. The work is particularly distinguished by the outstanding documentation of urban material potentials as well as the detailed planning of construction and dismantling.

Also nominated were these projects:

Congratulations to all of them!

Prizes at the department 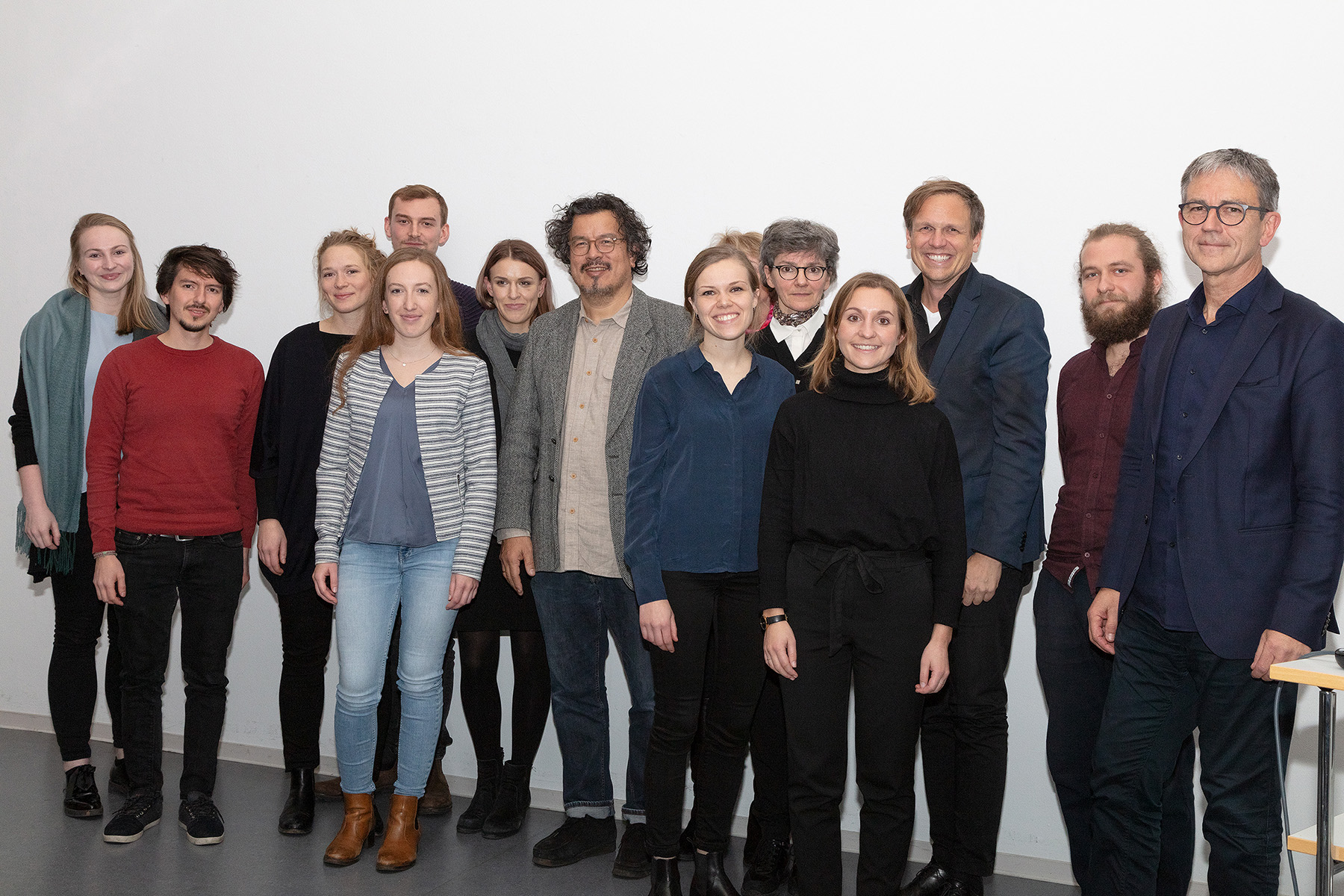 The main prize of 2,000 euros was awarded to graduate Ellen Rémy. Her design "Society is the Actor" envisages the construction of a cultural centre at a run-down inner-city traffic junction in Stockholm. Drawing on the concept of liminality, which refers to the state in which people have transgressive experiences, her master's thesis explores the particular urban situation of this site. With her design of a hybrid structure consisting of a theatre, a cultural institution and a traffic infrastructure, she creates differentiated paths and interfaces that enable the targeted and accidental encounter of passers-by and visitors to the cultural centre. The result is a place of communication that blurs boundaries and can thus contribute to the creation of a new cultural identity.
The work was supervised by Prof. Renzo Vallebuona and Prof. Dr. Georg Vrachliotis.

In addition, two recognitions were awarded. One went to Christine Kohlmann for her design "Einblick Ausblick Warenhaus" (Insight into the Department Store) (Prof. Ludwig Wappner and Prof. Markus Neppl). Based on a classic department store in Stuttgart's city centre, the realistic design shows how cleverly and farsightedly such a property could be maintained in the future with hybrid uses such as living, retail and working.

Another award went to Daniel Uhrig for his work "From Olympic Legacy to National Park / A Hotel near Sarajevo". In it, he deals with the restoration and conversion of a hotel complex near the Bosnian city of Sarajevo that was badly damaged during the war.

Also nominated were the projects:

Congratulations to all of them! 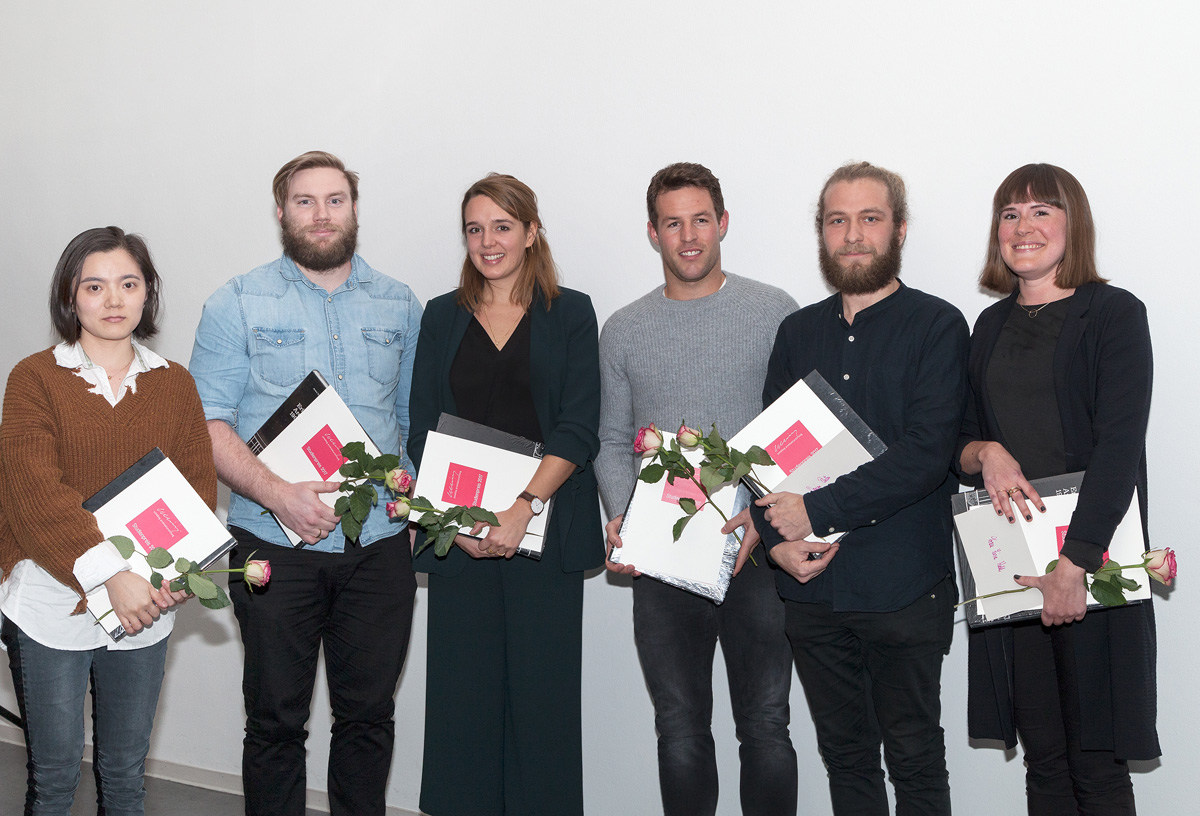 The main prize of 2,000 euros was split this year. The designs by Master's graduates Lisa Kahl and Damian Platten convinced the jury in equal measure.

Lisa Kahl's design "In Balneis Salus" of a bathhouse in a spatially functional connection with the Admiralspalast in Berlin's Friedrichsstraße convinced the jury with its detailed elaboration, the mature setting of the new building, the complex cutting and the architectural impression of the interior and exterior design. It succeeds in providing an outlook on how traditional bathing culture can be integrated into the fabric of a pulsating metropolis as a socially relevant and special place of pleasure.

"Cloud City" by Damian Platten is an architectural experimental structure within which familiar and new concepts of work and living can be simulated, tested and optimized.
The converted structure of the postal logistics centre at Basel station, which spans the track, forms the foundation of the project. On top of this are basic types derived from classic office construction, such as carpet, block, bar and point, as well as an externally curtained building infrastructure.

In addition, two recognitions were awarded. One went to Andreeva Andreyana for her design "A Cultural Campus in the Centre of Stara Zagora in Bulgaria", in which she complements the existing market district in the heart of the city to create a multi-layered and vital cultural campus with the aim of giving the city a new identity in the context of its eventful history.

Another award went to Jaqueline von Rooy for her work "Embassy Europe in Istanbul", which was excellently formulated in terms of urban planning and architectural design down to the last detail.

We congratulate all of them very much!

A new prize from the Schelling Architecture Foundation for graduates of the department of architecture.

On November 18, 2015, the Schelling Study Prize of the Schelling Architecture Foundation was awarded for the first time for the best final theses at the KIT Department of Architecture. The prize will be awarded every two years from now on. A total of six works from the past year were nominated.

The main prize of the jury, endowed with 2000 Euros, was awarded to Vicky Müller for her master thesis "Silent Spaces in the City". She deliberately deals with the aspect of faith as well as that of general retreat in urban space. Using various places in Karlsruhe as examples, she developed a system and a grammar of spatial methods and created her own specific formal language for them. The different variants show in an astonishing way their own character and an extraordinary design and spatial quality.

In addition, two recognitions were awarded. One went to Pierre-Jean Holl for his design of a museum in Cologne in the area of Cologne Cathedral. Programmatically, the design includes an extension of the existing Roman-Germanic Museum on the one hand and a new, spacious Cologne City Museum on the other.

Another recognition went to Max Mütsch for his work "Istanbul 2037 - a new paradigm for infrastructures", in which he explores the question of what strategic, but also urban spatial significance the infrastructure "motorway" can have for the future urban development of Istanbul.

We congratulate them all very warmly!