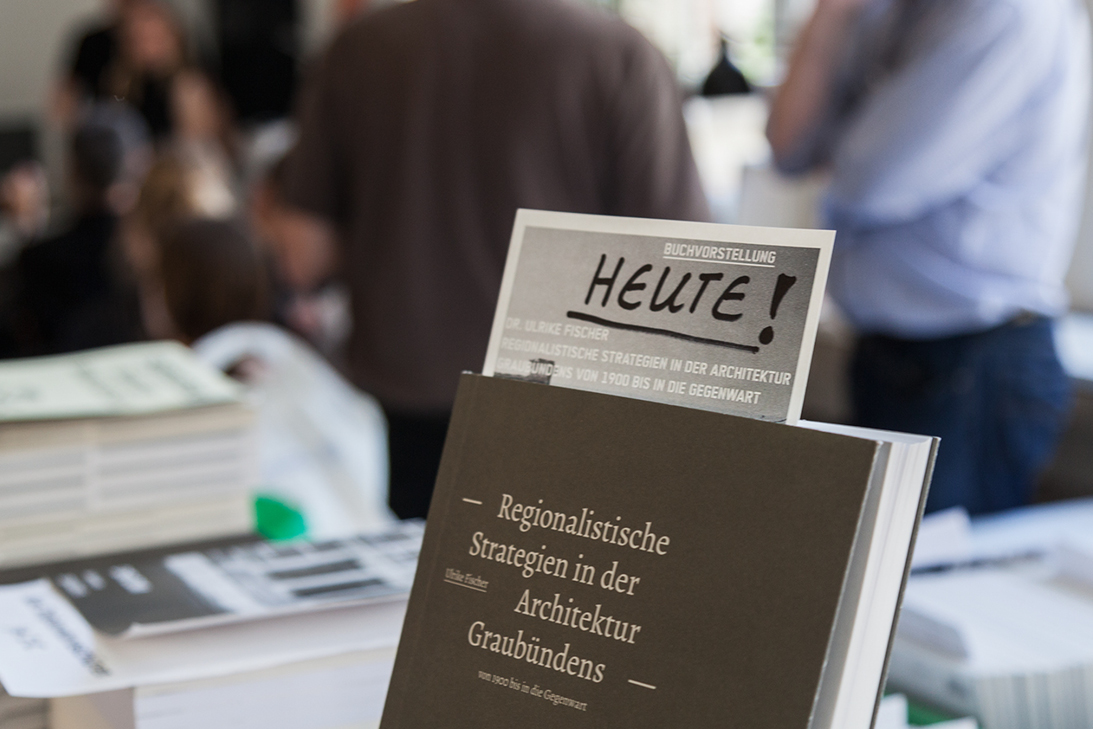 The books of the department

The Architecture Library and Library Board event series offers department members the opportunity to present their current publications. 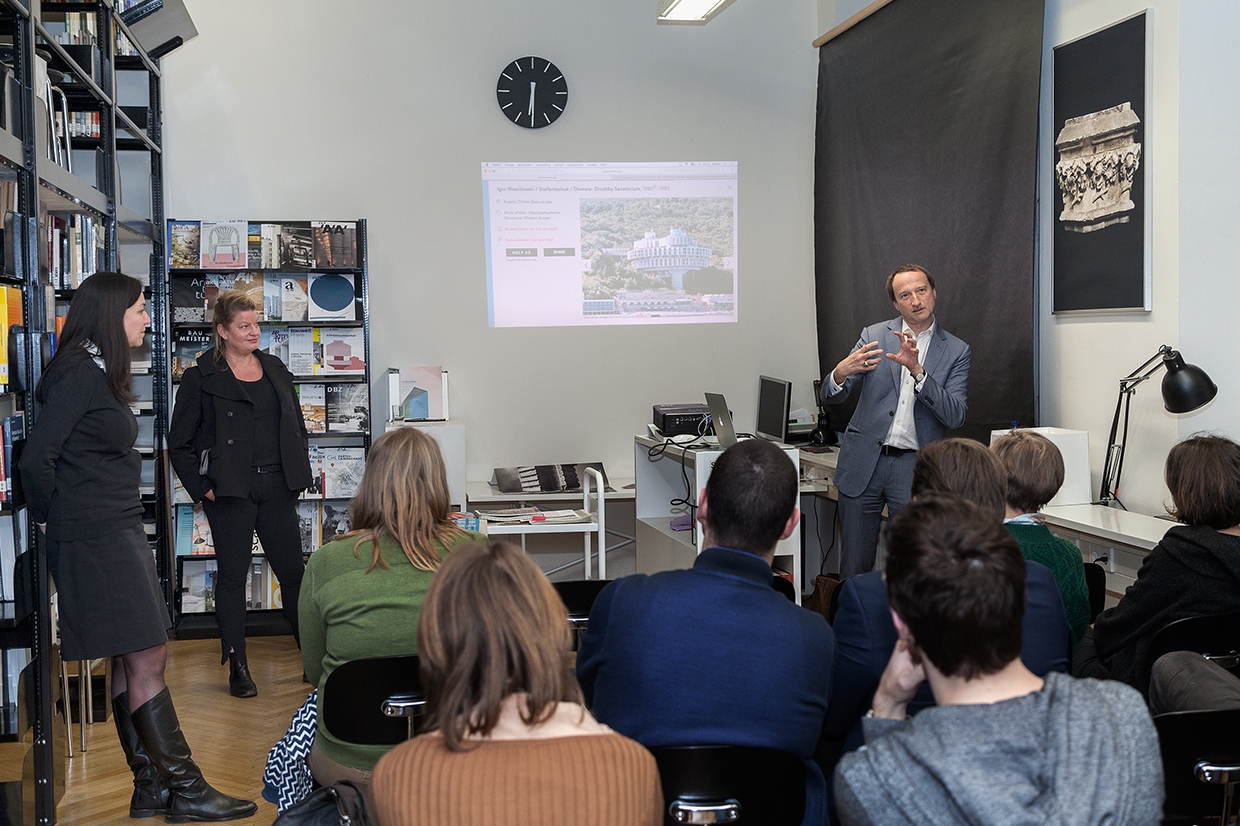 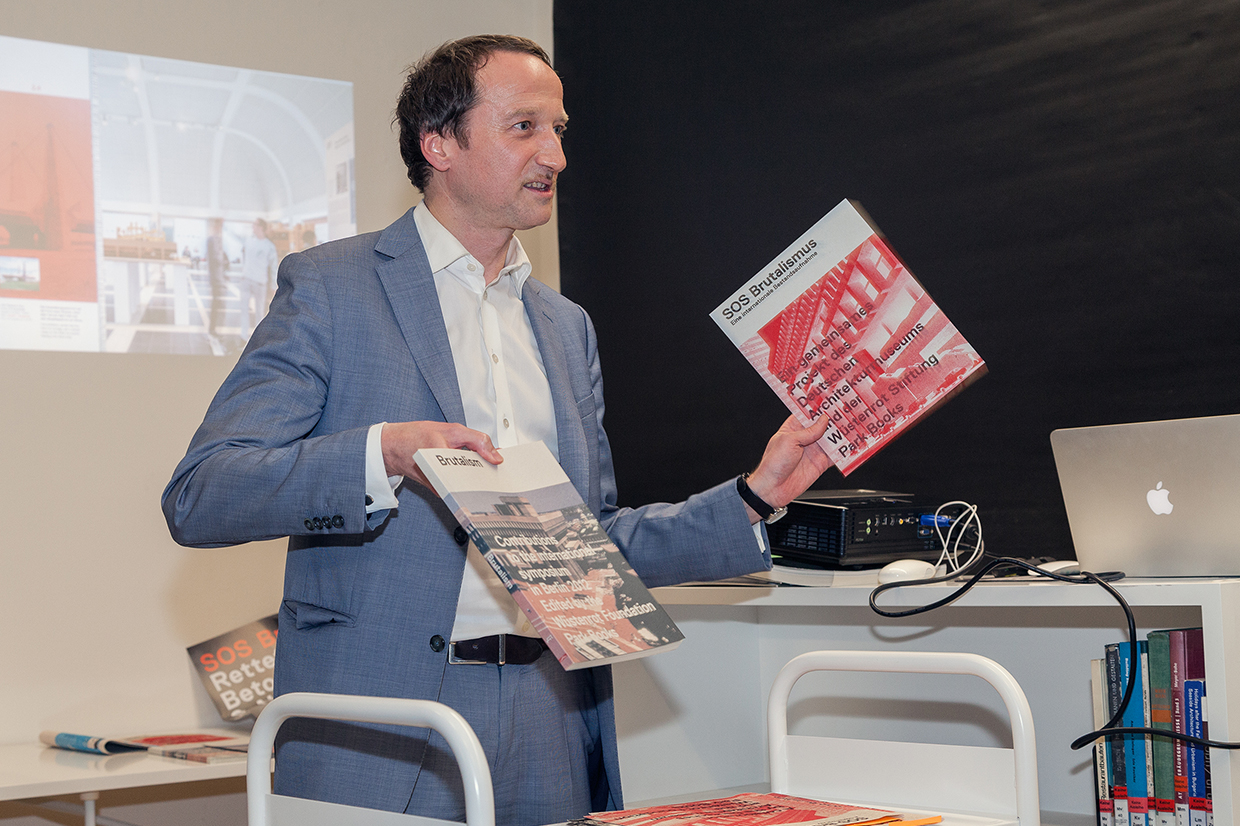 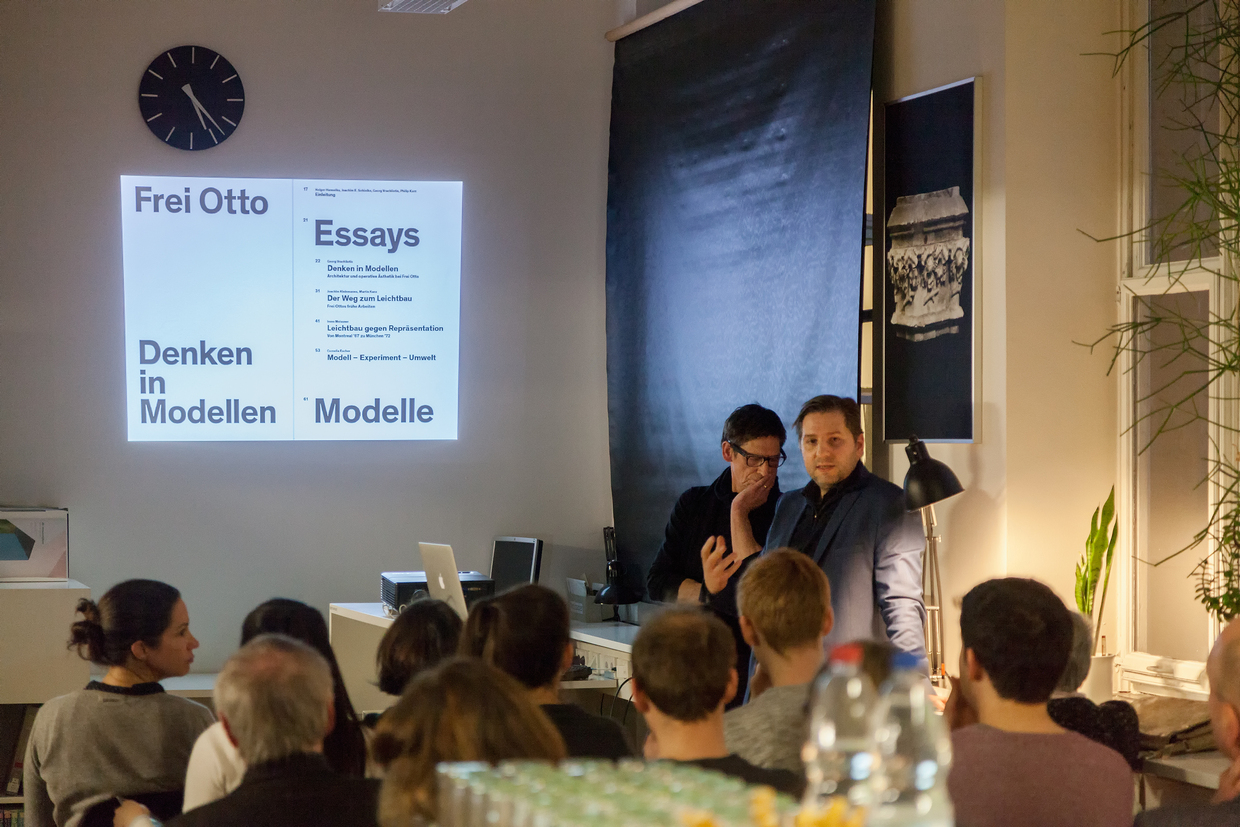 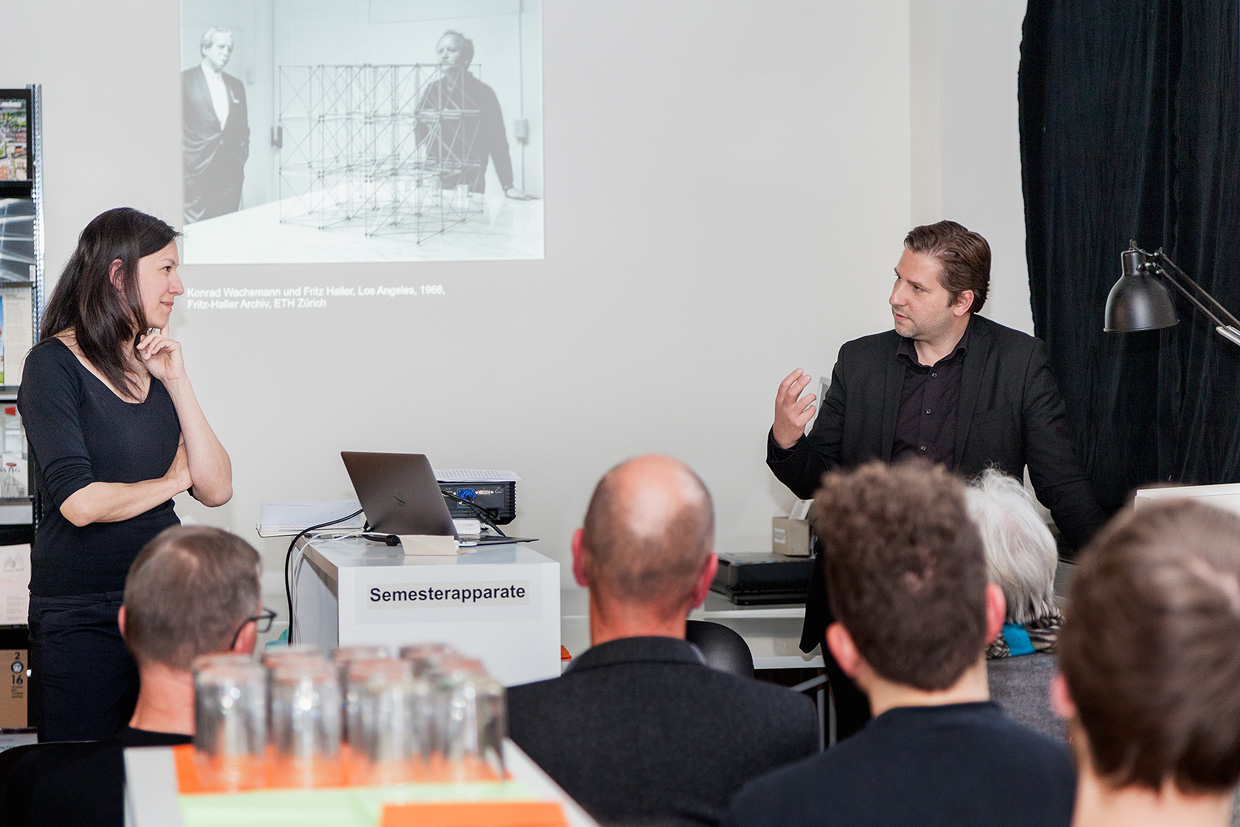 The Process of Making - Five Parameters to Shape Buildings

The interviews and essays by the architectural theorist, architectural historian and urbanist Werner Sewing (1951-2011) selected in this volume were published between 1998 and 2010. Their thematic range encompasses the discourse of city and society, of politics and participation, of spatial models and images of lifestyle designs in times of retrodesign, event culture, globalization, and digitalization. Werner Sewing's critical analysis and decoding of the background structures of a strategic guiding policy since postmodernism is of current explosiveness and relevance for determining contemporary architecture. The volume also contains archival material from the private estate on one of the first successful citizens' initiatives in West Berlin against the planned Senate development at Winterfeldtplatz from the 1980s, as well as introductory guest contributions on the topics of city, housing, and theme park by Johannes Boettner, Florian Dreher, Christine Hannemann, Bettina Götz, Richard Manahl, Angelika Schnell, Wulf Eichstädt, and Elisabeth Ziemer.

Stay up to date!

Historical versus modern: Identity through imitation?

SOS Brutalism is a distress signal. Since the 1950s, buildings by important 20th-century architects have emerged around the world that are the expression of an uncompromising attitude. Often, but not always, they are made of exposed concrete (béton brut, hence the term Brutalism). Today, many of these often controversial buildings are threatened with demolition or redesign. For some years now, a counter-movement has been forming against this, which is active above all on the Internet and in which the German Architecture Museum in Frankfurt (Main) and the Wüstenrot Foundation are also significantly involved with extensive research work under the hashtag #SOSBrutalism. The results of this international research were presented from November 2017 to April 2018 in a large exhibition at the DAM and in an extensive accompanying publication. In it, more than 100 authors document 120 important buildings in their current state and with rich visual material. Among them are many previously unpublished new discoveries, many of which are acutely threatened with demolition. The supplement brings together the contributions to an international symposium on Brutalism that took place in Berlin in 2012. The book was published to accompany the exhibition SOS Brutalism - Save the Concrete Monsters! at the Deutsches Architekturmuseum.

Oliver Elser is curator at the Deutsches Architekturmuseum DAM. Anette Busse is a course instructor for the master's program in the restoration of old buildings at KIT.

Frei Otto (1925-2015) is one of the most internationally renowned German architects of the 20th century. His architectural thinking is characterized by a radical turn towards experimentation, moving between science, technology and the arts. He built specially developed instruments for researching self-organizing processes, measuring tables for determining the course of forces, apparatus for researching pneumatic construction forms, or tools for analyzing complex network models. For Frei Otto, architectural models - if we can still speak of models in the classical sense here at all - function not only as "static objects", but rather as "dynamic objects", i.e. as process models of the entire environment. They thus embody an "operative aesthetic" that moves between the precision of scientific objects and the imagination of artistic instruments. Frei Otto saw his models as cultural indicators, which in their meaning often go beyond the purely physical feel of the individual object and must be read as experimental symbols for an open society. The Multihalle in Mannheim, realized together with Carlfried Mutschler, embodies this like no other building of the 20th century.

In 2015, Frei Otto was posthumously awarded the Nobel Prize for Architecture, the so-called Pritzker Prize, for his work. On the occasion of this honor, the Southwest German Archive for Architecture and Civil Engineering (saai) and the Wüstenrot Foundation, in cooperation with the ZKM, conceived the exhibition "Thinking in Models" on the oeuvre of Frei Otto. The catalogue of the same name published by Spector Books will be presented together with the book on the history of the Multihalle, also published by Spector Books.

"A somewhat banker's art institution" - The Old Karlsruhe School between Hübsch and Durm, by Johann Josef Böker
The building researcher Wilhelm Arnold Tschira, edited by Johann Josef Böker and Karlfriedrich Ohr
Book presentation with Prof. Dr. Johann Josef Böker
22.06.2017, 18:00
"A somewhat banker's art institution".
With these rather harsh words Joseph Durm characterized in 1867 the state of the Karlsruhe Department of Architecture at that time, to which he himself was to be appointed a short time later. The volume dedicated to the memory of Hanno Brockhoff, who died a year ago, deals in several contributions with "The Old Karlsruhe School between Hübsch and Durm", which is characterized by the names Friedrich Eisenlohr, Friedrich Theodor Fischer and Jakob Hochstetter, but also by the non-appointment of the important neo-Gothic Friedrich von Schmidt. An exchange of letters between Joseph Durm and his student Aristoteles Zachos provides an unusually personal insight into the circumstances of the Karlsruhe architecture department around 1900.

The building researcher Wilhelm Arnold Tschira
On the occasion of his 100th birthday on October 17, 2010, his former colleagues organized a scientific colloquium on the life and research activities of Arnold Tschira. The various aspects of his research activities on Roman architecture, late antique circular buildings, medieval archaeology, and urban planning in Karlsruhe were discussed. The papers presented at the colloquium are an important document in the history of the Institute, which owes its orientation and scientific profile to Arnold Tschira.
Moderation:
Bernita Le Gerrette

How can housing of the 1960s and 1970s be structurally renewed? Seven international authors analyze existing housing complexes of post-war modernism in the context of the social and economic changes that brought about a transformation of housing and household forms: To what extent do the functionally optimized housing units of the post-war period still meet the requirements of today's society? Can substantial improvement be achieved with small interventions? How can these be implemented under heterogeneous political, economic and social conditions?
The event takes place within the framework of the book presentation series of the Department Library of Architecture.
It will be moderated by Bernita Le Gerrette.

THE ISTANBUL ACADEMY OF ARTS FROM ITS FOUNDATION UNTIL TODAY

Book launch with Buket Altinoba /
01.12.2016, 17:00
This monograph on the Istanbul Art Academy provides insight into artistic image production as it has developed since the reform efforts in the late phase of the Ottoman state between the poles of continuity and modernity. The development is traced and analyzed up to the present.
The founding of the Academy in 1882 by Osman Hamdi Bey is practically the beginning of this development. From the very beginning, the art academy was a place of cultural transfer and mutual international exchange processes. At times it took on the significance of a place of nation-building. Based on Turkish-language source research, this study sheds light for the first time in German-language art history on both the history of the Istanbul Academy of Art and the changes in the production and representation of art in Turkey.
About the author:
Buket Altinoba is an art historian in the Mathilde Planck Program at the State Academy of Fine Arts Stuttgart. Before working as a research assistant at the Institute for the History of Art and Architecture, Department of Art History at the Karlsruhe Institute of Technology (KIT), she completed her PhD here on the topic of the theory and practice of art in Turkey in 2012 with Norbert Schneider (published as "The Istanbul Academy of Art from its Foundation to the Present. Modern Art, Nation Building and Cultural Transfer in Turkey" in 2016). Between 2008 and 2010, she was a doctoral fellow of the Research Training Group Image - Body - Medium. An Anthropological Perspective at the Staatliche Hochschule für Gestaltung Karlsruhe, which was supervised by Hans Belting and Beat Wyss. In addition, since 2013 she has been a member of the working group "Art Production and Art Theory in the Sign of Global Migration" of the Ulm Association for Art and Cultural Studies, as well as a member of the research group "Research Network for Transcultural Practices in the Arts and Humanities (RNTP)" at the Humboldt-Universität zu Berlin and Ruprecht-Karls-Universität Heidelberg.
The book:
The Istanbul Academy of Arts from its foundation to the present day.
Modern Art, Nation Building and Cultural Transfer in Turkey
Moderation:
Apl. Prof. Dr. Martin Papenbrock

Book presentation with Ulrike Fischer and Christoph Engel
07.07.2016, 16:00
It is the visible references and the recognizable places shaped by regional building culture up to the present day that are gaining new significance in the growing field of tension between globalization and regional identity. However, regional building culture is not a question of style, but in the broadest sense means a social and cultural attitude that is aware of the capital of the region and receptive to regional and global processes. For it is only in the field of tension between the "own" and the "foreign" and in the awareness that the different values of the new and the old are to be understood as development potential that an architecture can emerge which, connected with the place, contributes to the preservation and continuation of cultural identity.
The book:
Ulrike Fischer: Regionalist Strategies in the Architecture of Graubünden from 1900 to the Present.
Ernst Wasmuth Verlag, Tübingen and Berlin, 2016.
with a photographic essay "Between the mountains" by Christoph Engel.
Moderation:
Bernita Le Gerrette, Department of Architectural Theory, KIT

Book presentation with Jelca Kollatsch
07.06.2016, 17:00
The effects of Spain's financial crisis are particularly noticeable in the sunny south of the country. After six years of crisis, hardly anyone receives unemployment benefits, mortgages and rents are unaffordable from social welfare and so, according to Caritas, 350,000 people are undernourished. Six million flats are empty in Spain, and in parallel up to 500 evictions take place every day. Those affected in their difficult situation face bank giants and only through the strong self-help groups and solidarity actions is it possible for some to avert or postpone eviction. What happens to people's dignity when living conditions suddenly change in such a way through no fault of their own? What is worth fighting for when everything seems to be conspiring against you?
Jelca Kollatsch studied photojournalism and documentary photography with Prof. Nobel at the University of Applied Sciences and Arts Hannover from 2010 to January 2016. From May 2013 to April 2014, on four trips to Andalusia, she created this photo essay, which she self-published as a bilingual book. In March 2015, Jelca Kollatsch was awarded the CNN Journalist Award 2015 in the category photo for this work.

FRITZ HALLER. Architect and researcher Book presentation with Georg Vrachliotis at the Department of Architecture

03.05.2016, 17:00
Why is the work of Fritz Haller (1924-2013) still relevant?
Global networking, mobility, growth and scarcity of resources, sustainability are not just buzzwords of our time, they were already leitmotifs in the work and thinking of the Solothurn architect and researcher. In his visionary urban studies, he dealt with a whole spectrum of existential issues; in system building, whether industrial plant or serial furniture, he broke with previous conventions; in research and teaching, he made groundbreaking contributions to the architectural debates of his time.
His career between Konrad Wachsmann's institute in Los Angeles and the Technical University of Karlsruhe, between basic geometric research and the development of computer programs, resembles a tireless search for answers to the challenges of his time.
The book:
Fritz Haller. Architect and Researcher
edited by Laurent Stalder and Georg Vrachliotis
Moderator:
Bernita Le Gerrette, Department of Architectural Theory, KIT.